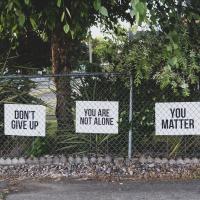 September 10th is World Suicide Prevention Day. In Massachusetts alone, an average of two people die by suicide each day, and another 18 are injured from self-harm.

One group particularly at risk are LGBTQ+ youth. We know that LGBTQ+ youth contemplate and commit suicide at almost three times the rate of their heterosexual peers and are about five times as likely to attempt suicide. Transgender individuals are at especially high risk, with an estimated 40% having made a suicide attempt by adulthood, and most before age 25.

What can parents and families do?

"One of the simplest and best interventions is offering acceptance and respect. We know that when a family rejects or strongly disapproves of their LGBTQ+ child, that child is 8.4 times as likely to have attempted suicide compared to LGBTQ+ youths whose families accept them. Evens something as simple as using the pronouns that your child or teen chooses can make a difference of 50% less likely to attempt suicide," said Marissa Hamrick, MD, Family Medicine. "Beyond that, keeping guns and dangerous medications away from youth is the next thing I recommend. Children and teens often know the family hiding place, so a lock box or safe is the best bet. If you choose to keep a gun in the house, make sure to also keep it unloaded and with the ammunition stored separately. If you are having trouble talking to your child or teen, make an appointment with your Family Physician or Pediatrician -- we love to talk through things and help keep your family safe. You can also contact the MA Coalition for Suicide Prevention at 617-297-8774 (or email info@masspreventssuicide.org)."